Drug Facilitated Sexual Assault: Who is it to blame?

Posted on October 23, 2012 by Stefania Morosini 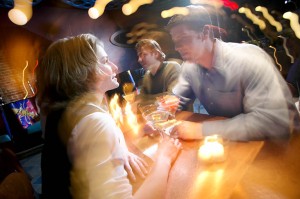 DFSA: What is it?

DFSA (Drug Facilitated Sexual Assault) is one common form of sexual assault, commonly known as drug rape, that has seen growing patterns in the last years. DFSA is a phenomenon that has not received the adequate media coverage for various reasons. However, it constitutes a constant threat for women and has to be treated as such.

DFSA mainly refers to the process during which drugs are added to a woman’s drinks with the purpose of enabling sexual assault. The term can also include the case of a woman getting raped while intoxicated by her own actions to the point of near unconsciousness. According to the EMCDDA Technical Datasheet on DFSA, released in March of 2008, there are two types of DFSA: The proactive DFSA, which is the direct type of adding a disinhibiting substance to one’s drinks by an assailant for the purpose of sexual assault, while the opportunistic DFSA is the sexual activity with someone who is intoxicated by his/her own actions and experiences loss of conscience.

The most common drugs used in women’s drinks are the central nervous system depressants, benzodiazepines, amphetamines and ketamine. DFSA is also widely associated with the use of GHB and Rohypnol, but the use of these drugs is quite contested by many specialists and researchers who have studied various cases in detail.

Despite the dispute on the kind of drugs that dominate the process of drug facilitated sexual assault, the reality is that DFSA is an expanded category of rape, with a significant increase over the past 10 years, happening in the perpetrator’s address, in the victim’s house or in clubs and bars. According to the 2001 British Crime Survey, 5% of rape victims were drugged in some way and 15% were incapable of any kind of consent because of the influence of alcohol.

Assailants choose some specific drugs that act rapidly, produce relaxation of the victim’s muscles and create anterograde amnesia for certain acts that occur under the influence of those drugs. The victim is raped under conditions of loss of conscience, which can very often result in extreme shock crises, when he/she realises what happened. Sometimes the victims do not remember anything because of loss of memory, which is very often the effect of certain drugs. This amnesic effect can prove destructive for the victim and the punishment of the rapists, since the victim hesitates in reporting the crime for days, weeks or months.

The limits of consent

DFSA is a horrible threat especially for women and it constitutes another covert and perverse manner in which men do not cease exhibiting sexual violence. Drugs, including alcohol, help these criminals cover their crimes, by blurring the conditions of the sexual assault. What I mean by that is that under conditions of intoxication, the boundaries of consent are not clear, since women almost totally lose the possibility of defence.

Sexual assault in the nightlife surroundings, where people choose to go with the intention to flirt, meet other people, have fun and drink can be a really complicated matter to investigate. Sometimes you cannot tell whether both sides involved in a sexual activity that follows heavy drinking and/or drugs have the intention to do so. Are both sides confused and drugged? Does a man put drugs in a woman’s drink on purpose, after following a carefully designed strategy? This is significantly different from the case of two people getting drunk and be keen on engaging in sexual activity. It is also different from the case of a man taking advantage of a heavy drunk woman who has not got full conscience of what she is doing. In any case, when a man abuses sexually a woman found in a weaker position, either because of alcohol or drugging, we have rape and it clearly has to be treated as such by the justice system.

A British judge recently declared the following on a case of sexual activity between a woman and two men, where the woman, due to excessive use of alcohol slept with two men, saying that sexual activity with the second was ‘involuntary’, as she had mistaken him for the first one she had sex with: ‘A woman who drinks to excess and returns voluntarily with two men, having sex with one man while the other is in the room, does not come to court with entirely clean hands’.

According to a new study, cited in the Daily Mail, a remarkable proportion of Britons believe that a woman who acts flirtatiously, wears revealing clothing or is known to have many sexual partners is partially or completely to blame for being raped. Also a woman is partially to blame if she does not succeed in saying clearly ‘no’ to men’s sexual advances. It is true, women many often find it difficult to say ‘no’. But is it because they learn not to say ‘no’, influenced by a sexist culture, where a woman has the duty to be attractive, wanted and available for sexual activity? Is it because women are more defined by their looks and sex appeal than by their intelligence, decisiveness and power? It certainly is. So, we really have to be careful when talking about consent. Consent sometimes cannot even be a choice for some women, who are indirectly and subtly forced to say ‘yes’ and not ‘no’. This should not deter the law from punishing strictly the rapists, who are some of the agents who enforce cultural misogyny and contribute to this cycle of women’s subjugation in the worst possible way.

A telephone survey of 1000 people in the UK, held by Amnesty International confirms the levels of cultural prejudice towards women-victims of sexual assault. The people who participated in the survey believe that women-victims bear a responsibility for their rape by their provoking behaviour, their mode of dress, and their use of excessive alcohol! Apparently there is a growing tendency for people to feel that the perpetrators should not carry the blame for their acts on the whole, especially when a woman has taken drugs on her own initiative before the assault.
Amnesty International UK director Kate Allen said on the issue: “It is shocking that so many people will lay the blame for being raped at the feet of women themselves and the government must launch a new drive to counteract this sexist ‘blame culture’.” How many women have suffered the painful results of rape in silence? How many women have felt shame and dirtiness for an act that men should first of all feel shamed of?

These sexist opinions that place the blame on women, not only fail to capture the responsibility of perpetrators and the essence of their horrible crime, but are also practically destructive for the healing of the women affected and the attribution of justice. Such social beliefs that stigmatize women who fall under men’s raping instincts result in making those women silent in many instances. Women who have been raped are afraid of reporting the crime because a part of them reflects the sick assumption of society that they are to blame for what happened to them, thinking that they should be more cautious and careful. Such stereotypes that put women in a position of guilt only constitute barriers to the achievement of conviction rates for the rapists and enforce other potential rapists to continue abusing women.

Unfortunately this notion is widespread through many different societies. I do not know whether the majority of the people participating in the surveys are men, but it would certainly make sense if this was so. I have heard of some information campaigns that appeal to women to modify their behaviour, so that their risk of DFSA is reduced. These campaigns remove the huge burden of male responsibility and indirectly leave male sexual violence untouched.

Blaming on women their rape is absolutely irrational. Even though the responses to concerns about DFSA should be sensitive in encouraging women to be very careful, not to leave drinks unattended, not to accept drinks from strangers, not to take drugs incautiously, it would be unfair and completely inappropriate to grant responsibility to them for the assault they suffer. Even if their mode of dress or their behaviour are not ‘as it should be’ the one who abuses of someone else’s weakness or behaviour is the one who should be held mostly accountable for their actions. The rape is an aggressive intrusion in another body and it is always delivered by the one who actively assaults another person. And at the end of the day rapists are always rapists and are not really influenced by the mode of dress or any similar factors – they target their victims and attack them under conditions of violence and perversion.

This article was published at talkingdrugs.org, you can also read it here.

This entry was posted in Criminal Justice, Opinion piece, The Voice of Women. Bookmark the permalink.